This site will be shut down on December 31st, 2022. We’ve had a good, long run but priorities and interests have shifted and there has really been nothing new to report on Mark for years now. We were hopeful that we’d see the release of some vault material but it hasn’t happened and we’re not sure it ever will at this point. We thank you all for your support over the years. Fare thee well everyone…

It’s true we’re taking a break from Facebook right now, but our site here is sticking around for now. We had a server failure which just happened to coincide with our departure from FB….

Today we have something very special indeed: A good friend of ours has shared a story written by Mark and given to her for all of you to enjoy here. It has been transcribed verbatim, and we are also including photographs of the original copy below. Hope you all enjoy and have a happy holiday season…

Once there was a horse and a crow
And they were best friends
Eary one morning in a field
They talking together
The horse asked the crow
‘If you had a wish, what would it be?’
The crow replied from the fence post
‘It would be to run upon the earth,
And feel the ground beneath me’
‘Thats easy’ said the horse
‘Jump on me and hold on tight!’
So the crow jumped on the horses back,
Holding on to his maine with his claws,
They raced through the fields
Through the low morning ground fog and
Over the frozen earth
The crow smelt the horses sweat
And was very happy They both breathed very hard
They rested by the fence and the crow asked
‘Do you have a secret wish horse?’
The horse thought awhile and replied
‘To fly through the air and taste clouds’
The crow pondered this for a bit and flew away
And after awhile the horse started to get sad
because he thought the crow had forgotten him
His body felt very heavy to him
Just then the horse
heard the crow cawing to him from a great distance
Then he saw his friend the crow way far off
And he had gathered hundreds of birds
They all landed on the horses back and
The crow said to the horse ‘Run! Run!’
All the birds cried out and flapped their wings
with a great commotion
The horse ran and ran until
They rose from the ground
They flew from the sky amongst the clouds
The horses field seemed very small
The horse laughed and laughed
he was so happy he could hardly breathe 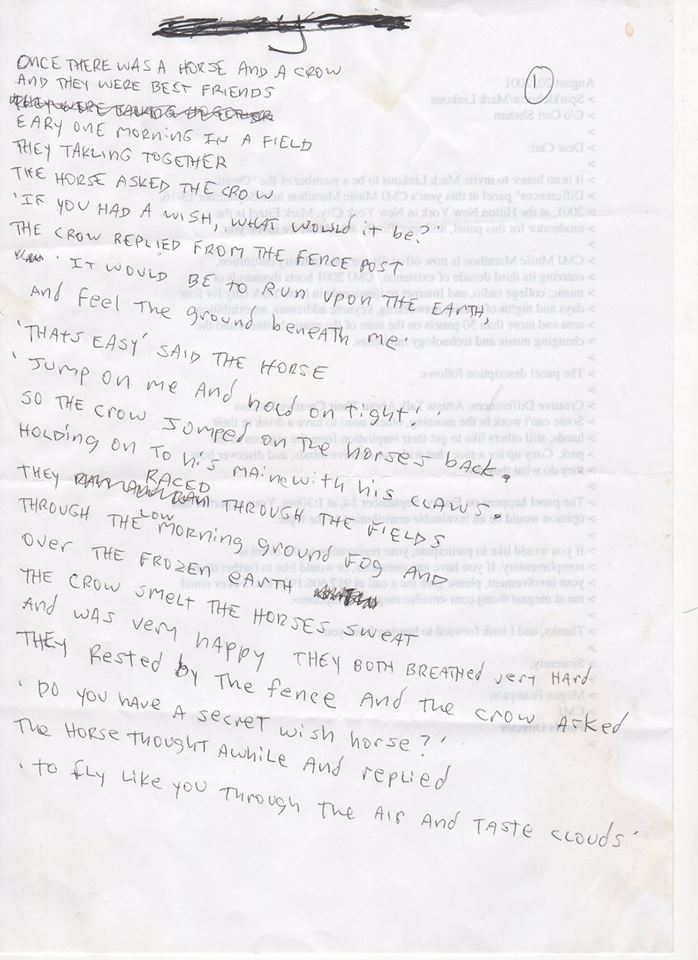 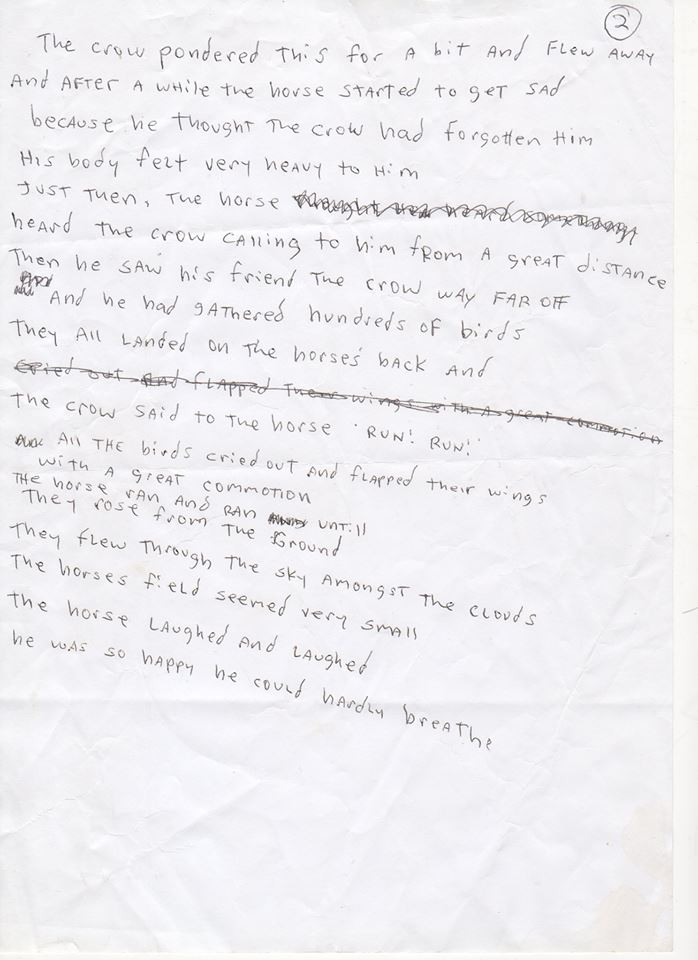 We have a special treat for your viewing pleasure, courtesy of The Mad Dalton aka Peter Sumadh. A long-form video of Sparklehorse live in Belfast from 2006. Our sincere thanks to him for sharing this. Note that this is rather large file (about 300 MB)  and may take some time to queue up in your media player.

As I’m certain was the case for many of you, one of the hardest and most heartbreaking aspects of the passing of Mark was the fact that he’d been working on a new album, and that it had been reported as being close to completion. And now three years on, music that we had an expectation to love, to cherish, to add to our library of Sparklehorse sounds, remains unheard, at least for now. There is hope that this music could come out sometime in the future, but it remains to be seen when this might happen.

And then just a few weeks ago, Daniel Potter sent me a message about an album he’d just started listening to, and which he was very very impressed with. I checked out a couple of songs and was pretty much stunned, and purchased a digital copy soon afterwards. And I cannot stop listening to it.

And so for those of you that have been waiting so long for the next Sparklehorse album, I would like to offer up a suggestion. Immediately go buy a copy of John Murry’s The Graceless Age. John is not Mark, certainly. But he was a follower of Mark. And TGA is a big, brilliant, heartbreaking and utterly captivating record. It’s the first record I’ve heard since we lost Mark that has made me feel like there are other artists out there who are capable making the type of music that Mark once did. No album since Good Morning Spider has so completely drawn me in and hooked me. And The Graceless Age shares many of the hallmarks of Sparklehorse – recorded samples, snippets of conversation, noise and static overlaid on beautifully orchestral arrangements dense with strings, guitars, pianos and vibraphones. Or harder rock songs underpinned by unforgettable melodies, cut through with blazing guitar lines. Influences abound, and a song like ¿No te da ganas reir, Senor Malverde? sounds somewhat like it could have been a lost track from Pink Floyd’s Dark Side of the Moon in the vein of Us and Them.

Also, I think it’s not at all a coincidence that John, also a Southerner originally from Tupelo, Mississippi, sings about the fact that he can’t stand California,a place where Mark also didn’t fare too well, and which he also came to despise.

The music is grand, the words gut-wrenching. Because also not unlike Mark, John has had has demons and has struggled with them, and has also stared into the abyss, and lived to tell about it. Little Colored Balloons is an epic retelling of Murry’s heroin overdose and near death and it’s told in the possibly the most honest and rawest way I’ve ever heard in a song. Its piano-driven melody, structure and passion to me recalls the cinematic scope of a song like Springsteen’s Backstreets, but the person that betrays the narrator in this song isn’t a girl named Terry, it’s himself. It’s an absolutely devastating and climactic song, yet it boldly comes far before the end of the record, and afterwards, even more hurt and heartbreak ensues in the elegiac Things We Lost In The Fire.

And then we finally get to Southern Sky, another densely-layered epic and possibly the highlight of the album. It’s a psychedelic dervish of a song delivered in a voice that sounds like it could belong to the ghost of Jimi Hendrix. Over an increasingly apocalyptic tapestry of sound, the chorus:

It all culminates a careening instrumental break where the song almost spins out of complete control, just to be masterfully reeled in for the final chorus.

Following this, and just when you think it can’t get any better, comes a song that could be a very close cousin to a Sparklehorse song, the hard-rocking yet gorgeous Penny Nails, which is of the same pedigree as Sparkehorse classics like Happy Man and (aptly) KIng of Nails. It’s here where some hope starts to emerge, like cracks of light shining through the black veneer of pain that overlays the record.

The album closes with a gentle, wistful take on Bobby Whitlock’s (Derek and the Dominoes) Thorn Tree in the Garden, where John’s deep baritone soars impossibly for the last word. It’s a wonderful musical metaphor that shows that this tortured soul can still triumph and rise out of the ashes. The Graceless Age is an instant classic of a record, an unforgettable account of one man’s journey through the darkness to the light on the other side. And it’s worthy of your time, your money, and your full attention. And I feel like I would be doing you all a disservice if I did not encourage you in the strongest possible terms to get it NOW…

We are very keen that all the information we present here is as accurate possible. With that in mind I’ve compiled a list of outstanding questions/queries which we are having trouble answering. The questions cover song credits, lyrics, videos, live lineups and live shows. If anyone out there can help us answer any of these or can pass them on to someone who can your help would be hugely appreciated!